Support the Campaign to Oppose the Charter School Ballot Question

Delegates to this year’s MTA Annual Meeting made the critical decision to fight this fall’s ballot question that threatens to destabilize our public schools by expanding privately run, publicly funded charter schools  The MTA has been working with a grassroots coalition of education, parent, student, and community groups on a “Save Our Public Schools” campaign to defeat a November ballot question that would lift the cap on charter schools.

This push to lift the charter school cap is an existential threat to our profession, our organization, and to the ideal of a democratic public school system that strives to provide equal educational opportunities for all students and that is accountable to local communities.  As an educator from Brockton who cares about the education of all the children in the Commonwealth, I urge all supporters of public education to back this campaign.

Charter schools create two separate and unequal school systems while draining essential funds from districts.  They are not held to the same standards as traditional districts and can set limits on enrollment periods and class sizes in ways that traditional districts cannot do.  And although charter schools claim they take all students, data continues to show that they do not serve as many low-income, special education, or English Language Learners as do traditional public schools.  This leaves the traditional public schools with a higher percentage of students who require more resources to educate while concurrently draining their resources. Massachusetts schools are already losing over $400 million a year to the eighty charter schools currently in operation. This loss of funds will only be exacerbated with the expansion of charter schools, and districts can’t afford it.

Our current Governor, Charlie Baker, and his Education Secretary, Jim Peyser, are strong proponents of school privatization through charter schools.  Both men came out of the Pioneer Institute, a right-wing think tank that promotes charter schools, and Peyser admires the work that has been done in places such as New Orleans, which became the first all charter school district in the country in 2014.  He sees this as one possible model for our state and seems committed to imposing it on a wide scale. In a 2014 article he laments that “only a few districts [such as New Orleans] are moving purposefully towards a diverse portfolio of autonomous and accountable schools, and most of these still have a long way to go before they have fully redesigned their public education systems.” (1)

Under Baker and Peyser, the charter school industry and its promoters in Massachusetts have an encouraging climate for working to “redesign our public education system” by lifting the cap on charter schools.   Legislation proposed by Governor Baker to lift the cap and allow up to 12 new charter schools a year is currently working its way through the legislature, but it’s highly unlikely that the Senate, House, and Governor will be able to come to agreement on it.  Therefore, the battle over lifting the cap will almost certainly be brought to the ballot box next November, where voters will decide whether or not the state should be able to authorize up to 12 new charter schools a year or add to enrollment where charter schools exist, with preference going to districts that rank in the bottom 25% on standardized test score achievement.

One of the most pressing reasons to support this campaign is that allowing up to 12 new charter schools every year would open up entire districts to charter school takeover in the “diverse portfolio” model being promoted by Peyser.  By strategically targeting one city or town at a time, they could wipe out the remaining traditional Boston Public Schools in just six years; Springfield and Worcester in three; Brockton, Lynn, Lowell, Lawrence, New Bedford, and Fall River in two; and smaller districts in just one year.  Charter schools could also go anywhere in the state and would no longer have any real limits based on “accountability” data.  If there were more than 12 applications, the preference would go applications in the lowest 25% on achievement or to places where there is a lot of parent demand.  But what happens once they fill up all the districts in the lowest 25% with charter schools, or if there is no parent or community demand?  Once the charter school market is fully embedded into the system, they will almost certainly find ways to keep filling it.

Some voters might argue that we cannot approach this issue with a line in the sand and just say “no.”  They will contend that charter schools are here to stay and there’s nothing we can do about it, so we should push a legislative compromise calling for stronger regulations while allowing for a cap lift. But if we compromise now or shrink in fear and the cap is lifted because we didn’t even try to fight, charter schools will begin to spread like a cancer through our Commonwealth.

The people who would privatize our public schools don’t care about children, learning, teaching, families, communities, equity, democracy, or our careers and livelihoods.  They are motivated by money, power, and control.  Once our public school districts are finally “fully redesigned” to resemble New Orleans, what will be left for our children and families?  Of our profession? Or of community and democracy?  Too much is at stake not to fight now.  Commit to fully support the campaign to Save Our Public Schools.
For more information on organizing tips and training opportunities, you can email educatorsforademocraticunion@gmail.com.

Talking to voters about a ballot question is much easier when there’s bushels of kale involved.  I’ve been setting up a table and chatting with folks about the Save Our Public Schools campaign, and it’s been fruitful. 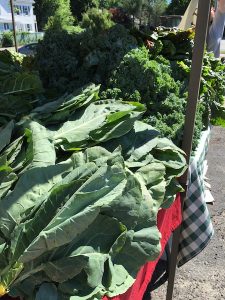 The trip to the local farmer’s market is a growing staple in many Massachusetts residents’ summer days. Bring the kids, bring the dog, bring your reusable tote bags. May I suggest, also bring your local community organizer. The farmer’s market is a great place to talk to local folks about issues that impact them as members of the community. They are also more likely to be chatty, since it’s expected that the trip will involve running into others in the community and exchanging pleasantries about crops this season with the farmers. In the past two visits to my local market, I’ve had about 100 little conversations with people about how charters affect local schools, and over 30 folks have signed commitment cards.

There’s always a farmer’s market boss, and this person is usually very busy and unlikely to be excited for a long chat. This person is also not going to want to jeopardize any business, so a political campaign presence in the farmer’s market won’t be welcome. Your job is to be super nice, brief, and as non-political as possible. When you ask for space, ask for a little corner or something where you can set up a table and hand out information. Like you’re a little old lady who just wants to spread the word about the church garage sale.  You will probably get a spot just outside the actual market – in our case, a patch of shady grass that turned out to be just delightful.

It will be a long day outside, and you won’t stick it out if you’re uncomfortable. Bring sunscreen, an umbrella or raincoat, water, snacks, comfortable shoes, and a folding chair.

The last thing you want is to hear someone say, “Great can I have a bumper sticker” only to find you’ve run out. A big part of campaigning is visibility, so the more stickers, buttons, t shirts, and yard signs out there the better. Your MTA rep or local Save Our Public Schools organizer should be able to set you up with as much as you need. Don’t forget pens and clipboards so people can sign on to the campaign!

You know how to explain stuff to people without being too wordy, too intimidating, too alienating – it’s what we do! So when you’re talking to people about the campaign, just explain in your best teachery way how the cap would affect you and your students. There’s no need to bash charters or throw around hyperbole; we are on the sensible side of things and when people are informed, they’re with us. Hopefully, you’re also a teacher in the same community the market is in, so you can talk about schools people know and count on.

Support the market that’s invited you to be there. Buy some local produce, chat up the campaign with the vendors, and make the boss happy he/she gave you the go ahead to be there. 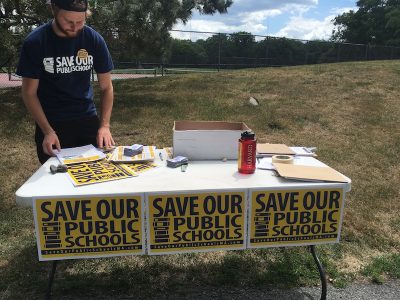